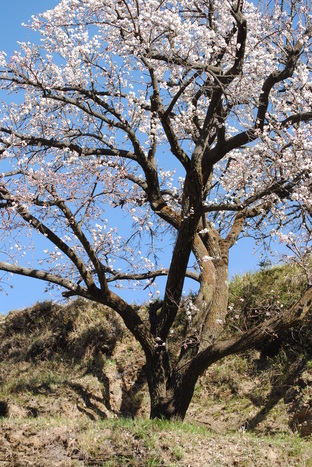 "India holds sacred, and counts as places of pilgrimage, all spots which display a special beauty or splendour of nature. These had no original attraction on account of any special fitness for cultivation or settlement. Here, man is free, not to look upon Nature as a source of supply of his necessities, but to realise his soul beyond himself. The Himâlayas of India are sacred and the Vindhya Hills. Her majestic rivers are sacred. Lake Mânasa and the confluence of the Ganges and the Jamuna are sacred. India has saturated with her love and worship the great Nature with which her children are surrounded, whose light fills their eyes with gladness, and whose water cleanses them, whose food gives them life, and from whose majestic mystery comes forth the constant revelation of the infinite in music, scent, and colour, which brings its awakening to the soul of man. India gains the world through worship, through spiritual communion; and the idea of freedom to which she aspired was based upon the realisation of her spiritual unity."

"Why should we be in such desperate haste to succeed and in such desperate enterprises? If a man does not keep pace with his companions, perhaps it is because he hears a different drummer. Let him step to the music which he hears, however measured or far away. It is not important that he should mature as soon as an apple tree or an oak. Shall he turn his spring into summer? If the condition of things which we were made for is not yet, what were any reality which we can substitute? We will not be shipwrecked on a vain reality. Shall we with pains erect a heaven of blue glass over ourselves, though when it is done we shall be sure to gaze still at the true ethereal heaven far above, as if the former were not?" 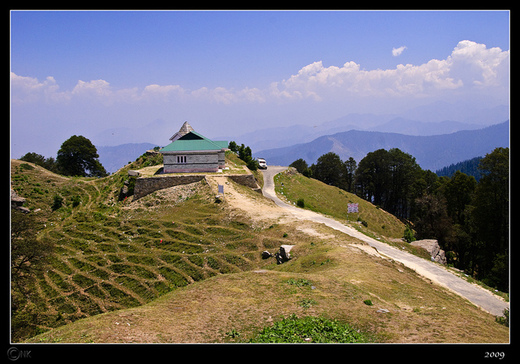 Western Himalayas and Tibet: A Narrative on Ladakh  and Mountains of Northern India

"… the conclusion has been forced upon me that these mountains have emerged extremely gradually from an ocean, of the existence of which, at many various levels, the most evident traces are, I think, discoverable. The present configuration of the surface must, I do not doubt, have been given to it during periods of rest, or of very slow elevation, the action of the sea upon submerged rocks being so very superficial that no denudation takes place at any great depth. During the period of emergence of the Himalaya, from the great length of the present valleys, which extend between parallel ranges far into the interior, the coast must have borne a strong resemblance to that of Norway at the present day, numerous promontories projecting far into the sea, and separated from one another by narrow and deep bays.

The slopes below Mattiana are covered with numerous scattered houses and a good deal of cultivation. A little rice is grown during the rains, but the principal crops are barley and some wheat, sown in spring and reaped before the commencement of the rains. The opium poppy, also a spring crop, is cultivated to some extent in the lower part of the valley. It is sown in early spring, and the opium is gathered in June… The appearance of this valley is considerably different from that of any of those nearer to the plains. The population is considerable, and collected into villages, some of which occupy the lower part of the valley, and are surrounded by a good deal of cultivation and numerous walnut and apricot trees, the latter of which are said, in autumn, frequently to tempt the bears from the forest, to indulge in what to them is a grateful feast…

On the 5th of August, a portion of our baggage, which had been left at Fagu two days before, from a deficiency of porters, not having arrived at Nagkanda [Narkanda], it became necessary to halt, in order to give it a chance of reaching us. The day was fortunately fine, and we availed ourselves of the opportunity to ascend Hattu, Captain Strachey taking with him his barometers, to verify their accuracy by the trigonometrically determined height of this mountain, which was one of the stations of the Himalayan survey by Captain Herbert. As the top of the mountain is only about 1500 feet above the Nagkanda bungalow, and the distance is nearly five miles, the ascent is an easy one. The first mile is nearly level, and bare of wood on the ridge, though the forest on both sides rises within a few feet of the crest, which is bordered by brushwood. As soon as the ascent commences, the ridge becomes covered with forest, at first principally pine, spruce and silver fir (Picea­) being the principal species. Yew is also very common, forming a fine tall tree, and the few non-coniferous trees are chiefly alpine oak, sycamore, and cherry. The road, which at first ascends a western spur, by degrees winds round to the face of the mountain, and finally ascends to the summit from the east. The wood on the upper part is entirely oak, and more open than the pine forest further down. The top of the mountain is steep and bare towards the east, for about five hundred feet, with precipitous rocks thirty or forty feet high towards the west, below which the slope is exceedingly steep and rocky in that direction.

The continuation of the main range towards the east is at first lower than the peak of Hattu by some 600 or 700 feet, but rises again to another peak within a mile [Reoghati]. A long spur or ridge to the south-west [Mehnah] is, however for nearly two miles, within a few feet of the same height as the summit of Hattu, and rises at about that distance into a point, which probably rather exceeds it. It then sinks rapidly towards the Giri river, the most easterly branch of which has its source in the ravine on the eastern face [Chagaunti river].

On the top of Hattu there are the remains of a square building, with very thick walls, I believe of native origin, and intended as a sort of fort, which, however, from the want of water, must have been quite untenable. It is now in ruins, its interior being filled with a wilderness of hemp, nettles, Garium Aparine, dock and other coarse plants…

In every direction except south, and along the ridge to the east, the view from the top of Hattu is very extensive, as it overlooks all the peaks in the immediate vicinity. To the north are the mountains of Kulu, which separate the valley of the Sutlej from that of the Beas, and from the upper Chenab, are most beautifully seen, their peaks rising above one another from west to east, till they enter the region of perpetual snow." 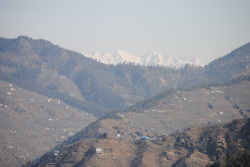 The Account of Koonawur in the Himalaya
Gerard, Alexander
1841
https://archive.org/stream/accountkoonawur00lloygoog#page/n30/mode/2up 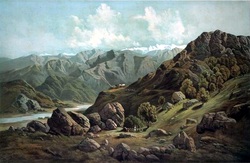 This image is taken from the book Results of a scientific mission to India and high Asia - Atlas Part II, by Hermann, Albert and Robert von Schlagintweit-Sakünlünski, on an expedition made between the years 1854 and 1867, and published in 1861.

[on the Grand Route] "However the impassable barrier of the Himalayas in north-west weakens a little and here is the trans-Indus country which nature has made very cold and where there are very high peaks and a narrow passage which skirts to the north and the Chinese Turkestan, but this passage is not an easy one. It is covered with the bones of numerous beasts of burden and the members of caravans who lost their lives through the sudden vagaries of nature. It is, however, remarkable that in spite of manifold difficulties caravans kept this route open for trade and commerce and the peaceful expansion of Indian culture to far off countries. This trade route was also used by innumerable nomadic tribes of Central Asia for migration to India. In the trade routes of the world perhaps this route is the ugliest. It lacks any trace of vegetation and the accumulation of ice also does not enhance its beauty, because there is scanty rainfall on the Himalayan plateau. But in spite of all these difficulties this route serves as a northern gateway to Indian sub-continent, and from very ancient times to recent years it had some commercial and strategic importance. In this route near Gilgit, is the meeting point of the boundaries of China, Russia and Afghanistan and therefore its political and strategic importance could not be exaggerated.

It would be interesting to inquire what changes had been effected in the northern Grand Route in the last 5,000 years. Geographically there has been almost no change in the countires through which it passes, but with the recent political changes they remain no longer so much isolated as they were before. As we have already noticed some amount of trade was carried on in this route in ancient times, but now it has a netwrork of well built roads not only for the passage of armed forces but also Chinese merchants have increased the volume of traffic on it."

Crossing the Sutlej near Simla on inflated animal skins.